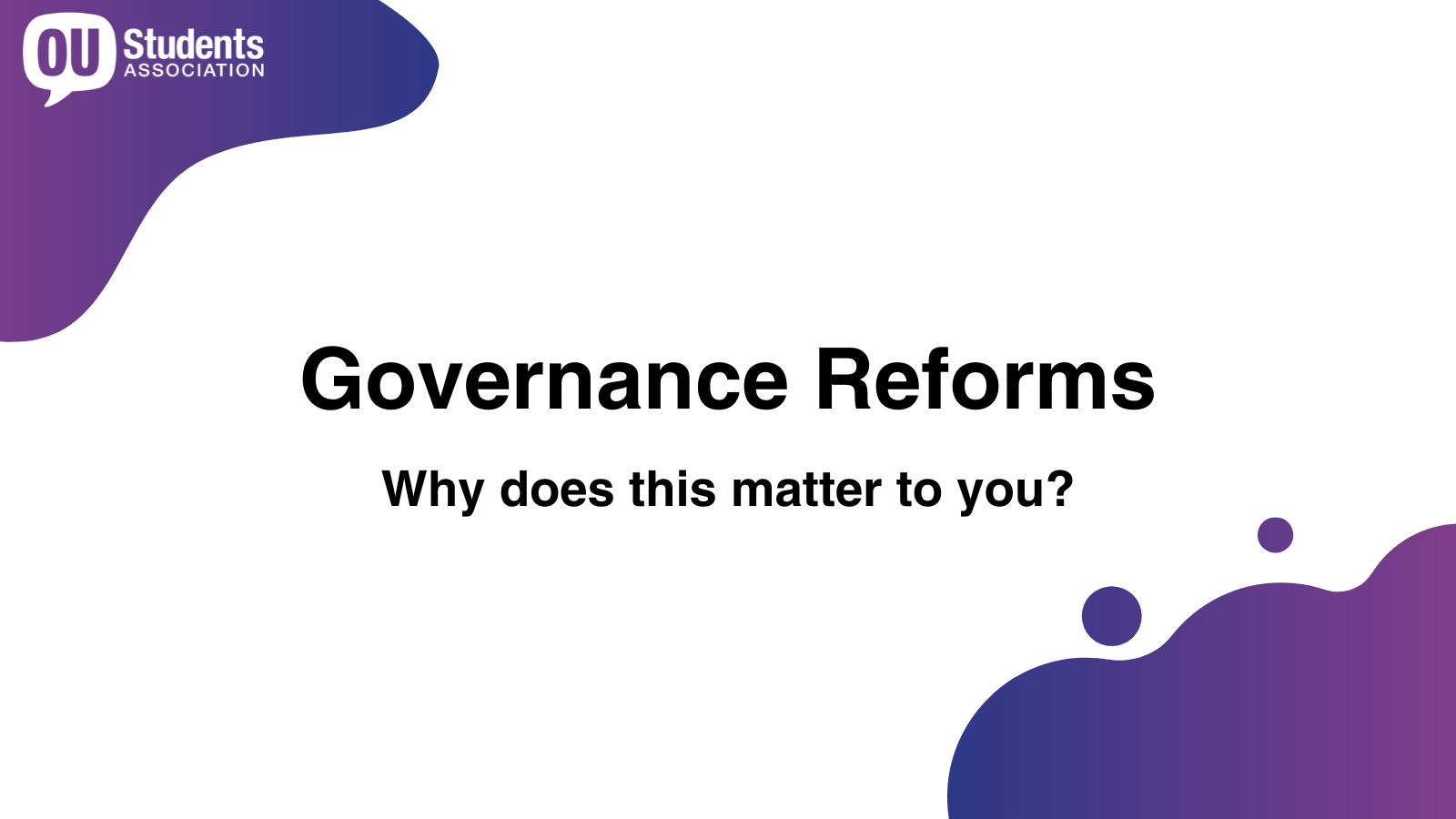 If you want the Students Association to continue to be an organisation that is run by students for students, you should vote against the proposed changes to the leadership structure. Replacing elected posts with appointed ones diminishes the power of self-government that the University has granted to the Association. Is this really what we want to do at the beginning of our 50th year?

These proposals are clearly driven by the low turnout of elections; but we have more students voting now than we did when elections took place at Conference; the bigger change is that fewer students are now interested in engaging with the Association. It feels as though the proposed changes will exacerbate that lack of relatability.

The Association excels at supporting students, solving problems, holding the University to account, making sure the student point of view is heard in university forums and committees. It isn’t clear how the proposed changes will improve the Association’s ability to do those things.We shouldn’t be focusing on the way the Association is organised but on how it can do more for students. We have already made substantial progress in a number of areas and would like to be spending our time sharing news of our achievements with the wider student body rather than on internal organisation.

This type of leadership/representation structure proposed is common in red brick universities where students can gather together on campus but it is not appropriate for a distance learning institution like the Open University where students are dispersed across the UK and beyond.

Our current structure, which is a diverse and inclusive body of elected students, already offers the opportunity for students with lived experience of specific areas to stand for election and be chosen by the whole student body. We also have a  range of supportive volunteers ready to help support their work, such as the DIsabled Students Group, BAME Group, and OU Pride, where elected officials can call on members with more knowledge to help supplement decision making.

There is also a larger pool of academic representatives who are also a massively diverse body of volunteers who can play a role similar to the proposed panel.  We already utilise their insight and knowledge on a regular basis. Extending their opportunities to input as much as they are able seems a much easier solution to gaining widespread active and informed engagement from students. Thier knowledge from working within the OU governance structure gives them an insight that is much needed and could be of great value to the elected officials.

With the right support structures in place, this would simultaneously make the workload of elected members more manageable and increase the number of students actively engaged in the formulation of University policies to support and enhance the student experience, without the need for all the changes proposed.

The reduction in the numbers of directly elected members of the student leadership team and their replacement by increasing numbers of appointed and/or co-opted students means the Association will be much less democratic in future. Only a small proportion of the students holding office in the Association will be directly accountable to the membership. The rest will be selected rather than elected and without clear guidance on how they will be appointed, it feels like it will be much less transparent to the student body overall.

In short, we are not a campus based university, we cover a huge stretch of the world, and need to have a range of elected roles open to students to adequately reflect that. And openly denying the electorate the opportunity to vote for their nation and faculty choices doesn’t strike me as being fair to anyone. And if those posts are part of the elected ones, it needs to be clear up front that that is the case. The vagueness of what we are being asked to vote on makes it really hard to argue one way or the other.

Making the team smaller, when we are currently stretched thin due to ever increasing workloads seems bizarre. The governance review said we need to be mindful of workloads and this seems to drive the opposite view, that 6-8 members are sufficient to do the work of 20. When you factor in jobs and families, studying, and other hobbies too; we are asking a lot of those who might be open to standing. Reducing capacity sits diametrically opposite to the report recommendations.

The requirement of the Board of Trustees changes too, moving from having 3 elected members also ex-officio Trustees, to having a majority of elected members also Trustees seems like a massive conflict of interest. We need to see some division where the majority are NOT trustees, not to a stance where 4 of the Student Leadership Team are.

The panel to support this work is also not clearly defined and makes it hard to know what we are voting for. We already have, as shown above, a structure for gaining wider insight. And with some being appointed and some elected, again we ask who is doing the selecting? Would be good to know before casting our votes who we are putting our trust into for this.

Without the kind of detail outlined here, we are being asked to vote on faith alone that this will all be alright on the night.

There isn’t enough information to vote in the new system. We need to know exactly what roles the newly elected team will be taking, and what their intended workload will be. If the current Central Executive Committeeis already swamped, how will making it smaller actually help?

It pulls accountability from the student body to elect its own representatives, which makes it a less democratic process. And definitely takes the Association away from being an organisation run by students for students, and more into a service that is provided to students.

Click here to find out more about the Governance Reform Conference resolutions.

omg
2
omg
The Open University Students Association exists to serve the interests of #OUstudents and ensure that the student voice is heard throughout the University. Find out more about what we do at oustudents.com