Hello! My name is Bradley and I’m a conservation scientist and Open University (OU) graduate. From 2014 to 2019 I studied BSc (Hons) Environmental Science and at the end of this year (2021) I will be back at the OU, on campus this time, studying a PhD in urban butterfly conservation. 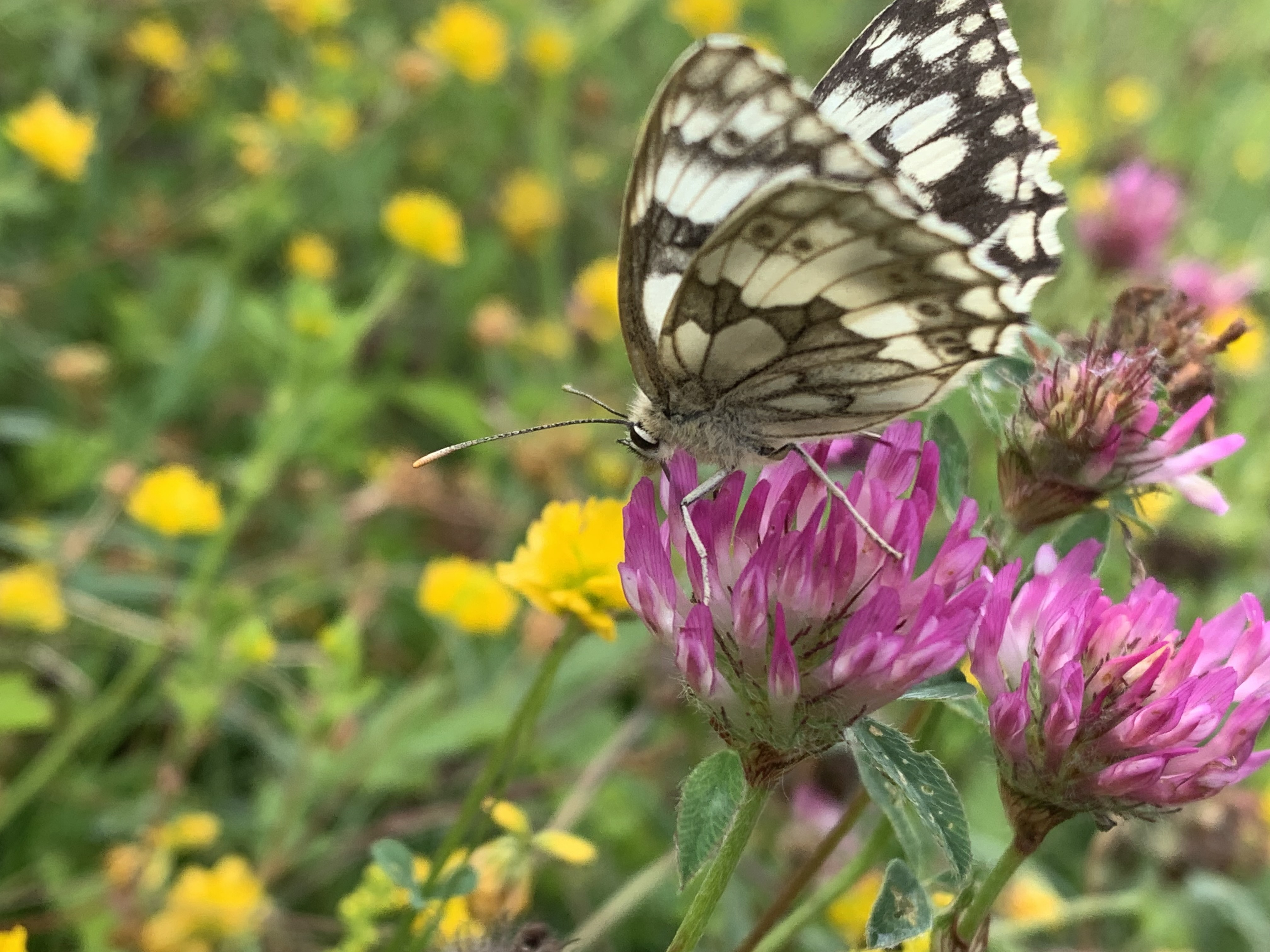 A Marbled White (Melanargia galathea) butterfly at Howe Park Wood, one of my favourite places in the world. Photo: Bradley Neal

My journey to this point has been a long, challenging but highly rewarding one. I’ve written about my love for the OU several times recently, but here I’d like to discuss my proudest achievement during my time as a student which influenced my career aspirations.

In 2018, I began my final project module at the same time as T313 – Renewable Energy. This is of course an essential module for any environmental scientist to study and grasp. Its prior sister module, T213 was amazing and one of my favourite modules (bar ecology, of course!).

At the time, the EMA of T313 was to design a cost-benefit analysis of “retrofitting” an existing building with renewable energy technology. We were able to choose Project type A, a community-based project, or Type B, a buildings-based project. At the time, I worked as the Senior Science Technician at Shenley Brook End School (SBE), now part of the Five Dimensions trust, a freshly formed multi-academy trust ‘merging’ with Hazely Academy. This job position gave me the perfect opportunity to use real data on costs, energy consumption, and extrapolate carbon dioxide emissions to mount a very strong case for the implementation of solar panels on SBE.

An excerpt from the first ‘pitch’ document, and major motivations for the project. The Head Teacher agreed with every point.

I requested and was granted very quick access to both electricity consumption data, bills, and everything I needed to see if this would work as a project. It did, but beyond that, I was able to very clearly and scientifically demonstrate that this wasn’t just a workable plan, but what I considered to be an essential plan to implement in a place of education. Stakeholders included the students (first, of course) and the finances of the Trust (and perhaps supporting continued life on earth, etc!). Clearly, educating children about the natural world, our anthropogenic impact on it, and technology that can help us to live more sustainably is incredibly hard to argue against. I had plenty of discussions about logistics and an outright rejection at one point, but the Headteacher and science department where I worked was extremely supportive, it actually ended up happening! Unbelievably, as the school had just finished plans to form the Five Dimension Trust, they opted to install solar panels on Hazely Academy as well. This was an amazing step forward, as various legislative changes made it difficult to fix the maximum panel on SBE, but we were able to spread this across two schools. The total array size combined is now 485 kWp.

Over 25 years, the trust will save hundreds of thousands of pounds, but most importantly it will demonstrate to every single student across the trust (3,300+) that solar panels work, and they work well. They save carbon emissions versus grid electricity to the tune of thousands of kg. The school entered a partnership with Solar for Schools and construction of the solar panels started in late 2019. Unfortunately, I didn’t see them go up as I had left to start my MSc by then, but I saw the paperwork signed and the project go ahead! It took about a year from discussion to construction, which is in retrospect a very quick turnaround and shows how progressive and how much of a great school SBE is.

Impact to date at the Hazeley Academy. Image: Solar for Schools.

The enthusiasm from the Trust was amazing, particularly how this was such a radical change in how they viewed energy consumption and generation. However, I probably wouldn’t have had the confidence to go ahead, press so much, and be so very persistent (and potentially annoying!) without the support, enthusiasm, and guidance of the brilliant Chief Executive of the Educational Wealth Fund and fellow OU graduate, Jason West. It is fair to say that he had a great influence on my extreme passion for science education, and I may well have ditched the idea from the lack of progress made sometimes had it not been for Jason’s encouragement.

My future career aspiration is to lecture at a university once my PhD is completed, and he has no doubt been an important figure in my choice of direction. For the reasons listed above and several others (including the due date being literally on the day I was getting married!) I will never forget the impact this module had on not only my sense of pride as an OU student, environmentalist, and scientist but certainly a huge turning point that really fueled a fire of passion for education.

The OU family is a big one and one I am immensely proud to be a member of! I would have never even thought to do this before I started at the OU, and it’s the only university that would take me as I performed poorly during my compulsory education. Being able to implement my education was the most satisfying thing I get to do, and this was an amazing place to start.

The OU’s philosophy of education for all to facilitate social mobility, equality and justice are values I will hold dear forever.