Although I had visited campus before, this time was different. This time I was here to work. My name is Tim – a Year 10 pupil at The Royal Latin School in Buckingham. 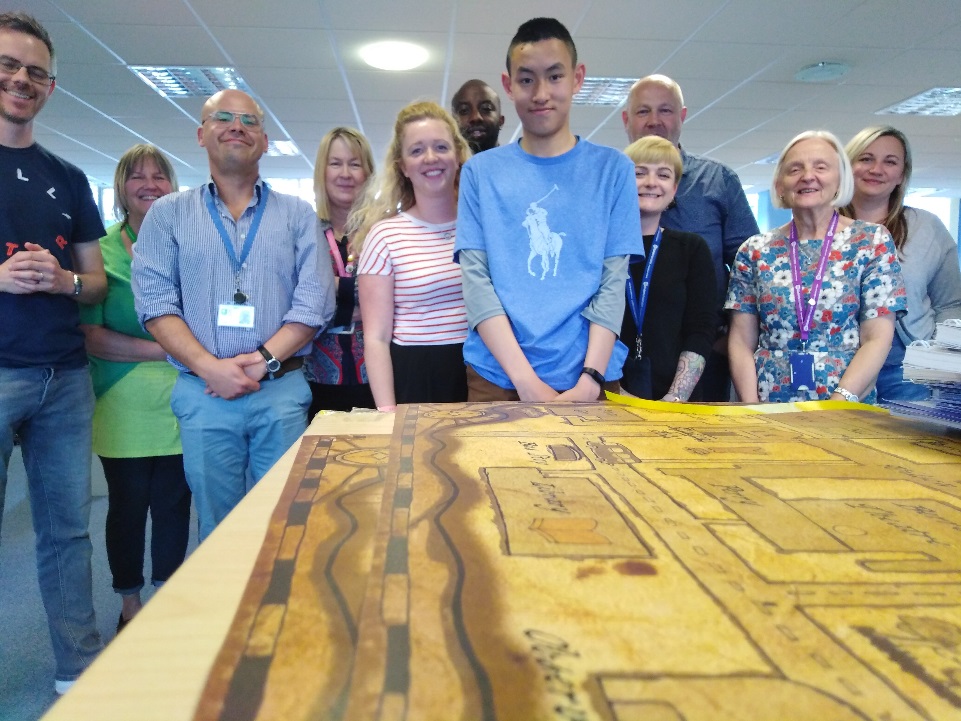 As I entered reception I could see contemporary architecture emblazoned with the famous OU logo. I don’t think it was a feeling of fear or worry that slowed my pace down as I approached the automatic doors; more perhaps a feeling of nerves and excitement.

Adam, who works in the Operations Team, arrived and I immediately thought that he was an enthusiastic, kind, interesting and funny person. After my induction and an introduction to all the team members, I relaxed. The scariest part was over. I went to my first Operations Team meeting, which was less intimidating than I had expected. The discussion had a friendly, interesting atmosphere – Magda, Joel, and Adam made me feel included in the open discussion.

After my break, Magda gave me an introduction to the OU Students Association. The history and structure were so interesting that I ended up researching a bit more at home later! One thing that I learned was that the OU has A LOT of acronyms. Lunch arrived fast, and I couldn’t believe that half of the day had disappeared so quickly. As the saying goes, time flies when you are having fun!

After lunch, I researched potential new products to be sold online and at Graduation ceremonies such as water bottles. I also carried out Excel work for a lovely lady called Taz who works in the Finance department. She was very helpful and patient as she explained the basics to me. 4pm arrived and after packing up my stuff, Adam kindly walked me to the library where my dad was collecting me.

I managed to get lost finding the office! I admit I could have taken the simpler route but I was adventurous and was soon panicking running up and down the stairs looking for the Wilson E building. Eventually, I recognised a door and managed to find my way.

For the first two hours of my day, I finished off my Excel work for Taz. The more time I spent on it, the quicker I became and my work was more accurate as a result – it felt really good to complete it! I then began finishing the water bottle research project from yesterday and I presented my findings to Adam, who provided some useful tips for me so I continued researching the type that was cheap, attractive and good at keeping liquids cool and hot for a long time. Much to my luck, I found three amazing flasks that matched the standards and requested free samples.

After lunch, I joined Sam, Head of Student Voice. The job was quite fun as I was able to improve my skills on a computer. Sam told me to pay attention to small detail and be careful when I transferred data from one tab to another. Sam was lovely and answered all my questions with patience and kindness.

After this, Adam and I went to the OU Students Budget Association (OUSBA) building for a training session which was interesting and meant I could meet more people. We spent about an hour discussing OUSBA before returning to the office.

Yet again, another day flew past just like that and I felt like one week wasn’t enough for my work experience. One could say I had fallen in love with the job.

There are three kinds of people: those that look back at their past two days surprised by how much progress they have made, those who are sad about only having three days left and others who don’t care. I would say I’m either the first or second kind. As usual, as I entered Wilson E at around 8am the office was already full which showed me just how hard the staff work at the Students Association.

I spent more time with the Student Voice Team in the morning, and then Joel told me all about the OU’s 50th anniversary and the different products that were sold in celebration of this event.

Joel told me lots of interesting things and I learned that the OU Students Association is the only part of the university that is allowed to use the OU brand and crest for copyright reasons. Joel took me downstairs to look at the products and I was amazed by their quality.

After lunch, I researched OU courses, fees, and funding. As I love making PowerPoint presentations, I made one for each. Later on, I researched the Open University Students Educational Trust (OUSET) where I learned that prisoners could also be helped by OUSET but all applicants needed to meet certain criteria.

At 8am, I immediately started on my blog, as I wanted to complete it while all the events were still fresh in my mind. 10am quickly came round and just like Monday, I found myself in a meeting with Adam, Joel, Magda, and Mandy.

After my break, I worked with Jodie and Amy from the Community Team. I was asked to compose clues and questions which they would put on the website for people to carry out a treasure hunt and potentially win a prize. I spent my lunch with Adam at the cricket nets practising my cricket bowling which was really helpful as I learned some useful tips on how to bowl!

1.30pm came round quickly and I was back in Wilson E finishing my treasure hunt project. I presented to the team which went really well. The day ended quickly and after saying bye to the team, I walked to the library to meet my dad. On my way home, I reflected on the whole week and pondered sadly about tomorrow being my last day.

I was very sad that today would be my last day in Wilson E. People were already sitting at their desks working hard and I knew that this would be the last time in my childhood that I would be able to experience this again.

I grabbed a box of Ferrero Roches from my bag and placed it in the kitchen along with a card to thank all the amazing staff that helped and welcomed me throughout the week. I wrote my blog from 8-10am which was extremely hard as the good memories swarmed through my head.

I wasn’t going to see Taz again either so I wanted to finish her work in the best way possible. She wanted me to sort out a handful of papers into order. It was the last day and there were bound to be staff that would say farewell but I didn’t let that distract me from my work. I had to show my best self on my last day.

After I had finished delivering all my personal thank you letters to the team, I started to help the Volunteer Team on their current roles. Despite the fact that they said it would be boring, I honestly quite enjoyed doing it. I then was asked to create a background page of the OU. I really enjoyed looking at past pictures and using different colours and fonts to really make my page stand out. I was quite proud of the three options I made and Beth, Head of Student Volunteering, was happy.

As it was my last day, Adam decided to treat me to a game of squash. To be honest, I didn’t think it would be fun at first (the idea of hitting a ball against a wall didn’t appeal to me) but after a while, I found it quite fun. After 45 minutes of squash, I practised my cricket bowling again whilst Adam helped me. It was then time to go in and I felt sad as I walked away from the nets for the last time.

After getting changed, I had a friendly talk with Vice President, Stephanie Stubbins. She explained to me what her job was and emphasised how much she loved it. After an hour of writing my blog, everyone went outside for a tea party to celebrate my week here, which was great fun. Afterwards, everyone returned to Wilson E for the last hour of the day. For me, it was the last hour of my time here.

After I finished working on my blog I then had one final picture with everyone. I paid farewell to my lovely supervisor, Adam, who without him, I wouldn’t have enjoyed this week so much. As much as I would have loved to stay, I knew that I possibly couldn’t but I promised to visit in the future.

I love the OU Students Association and I will always remember the good people there.

Posted on behalf of Tim