The question of what colour the dinosaurs were may appear a simple one. Popular culture has continued to proliferate the idea of creatures with scaly skin hued in a manner similar to that of modern-day lizards. Greens, beiges and browns are often the de rigueur colour palette. However, recent technologies and innovative techniques have allowed scientists to discover that not only were dinosaurs covered in a protofeather ‘down’, but that these feathers contained strong pigments which gave dinosaurs striking colours. Current academic debate in this area this has prompted me to consider the very beginnings of our imagining of dinosaurs as living creatures, and how this compares to current understanding.

At the turn of the nineteenth-century, the study of ancient life on Earth, known as palaeontology, had established itself as a new and exciting branch of geological study. Increasing numbers of amateur geologists were venturing out into the field in search of ancient species preserved underground, resulting in a proliferation of discovery.[1] In 1854, the residents of Sydenham, south London were about to become central to this new-found interest in natural history thanks to the arrival of a cluster of residents not seen in full for 65 million years.

A contemporary nineteenth-centyr print showing the landscape for dinosaurs with a tour underway. Image credit to Friends of Crystal Palace Dinosaurs.

At Sydenham Hill, work had just finished on moving the huge cast-iron glasshouse structure called Crystal Palace which previously housed the Great Exhibition in Hyde Park to its new permanent home.[2] As part of the grand opening, the grounds of Sydenham Hill had been extensively renovated into a park spanning nearly two-hundred acres. At its centre, where the park’s lake was flanked by woodland, three small islands had been constructed to represent three geological eras in the Earth’s history; from the Paleozoic which began nearly 541 million years ago, through to the Mesozoic and finally the Cenozoic.[3] As a result, visitors wandering around the meandering lake and through the dense woodland were essentially walking through time; and whilst doing so, were watched by creatures unlike any they had ever seen.

Dotted around the islands were huge statues of grotesque lizard-like creatures. Lurking at the water’s edge were Ichthyosaurs, observing curious visitors pass with eyes resembling sea-shells. Clustered behind the trees were a pair of Iguanodon, whose imposing size and claws sought to terrify. Amongst the trees on the opposite side was a Megatherium, otherwise known as the giant ground sloth, dwarfing the tree it perched against.[4] These statues were the first attempts at recreating true-to-scale, three-dimensional extinct creatures from fossilised remains.[5] Constructed from internal brickwork and covered in concrete textured to create scales, and painted in brilliant hues, they appeared highly true to life.[6] To the Victorian guests who visited the park, the dinosaurs were one of the star attractions, captivating audiences with a mix of terror and intrigue.

The dinosaurs at Crystal Palace park today. Image credit to Friends of Crystal Palace Dinosaurs.Today, the dinosaurs remain firm residents of what is now Crystal Palace Park. They are icons of the golden era of geological discovery in the nineteenth-century, where much of the physiology of the dinosaurs was in fact still very much unknown. As a consequence, many of the statues display extreme artistic licence. Perhaps most famously, the Iguanodon’s thumb-claw was placed on its nose as a spike, an attempt to perpetuate the notion of a vicious predator.[7] Later analysis has in fact reveal Iguanodons to be docile herbivores. Certainly products of their time, these statues played into nineteenth-century notions that the bones being unearthed from the ground once belonged to fearsomely large creatures far beyond the imagination. Indeed, even the term ‘dinosaur’ coined by palaeontologist Richard Owen in 1842 translates to ‘terrible lizard’.[8]

Despite inaccuracies of detail, the national importance of these statues to the history of science is significant. Historic England’s National Heritage List includes them as Grade 1 monuments, the highest categorisation.[9] They reveal to us how mysterious the field of palaeontology is, with modern techniques continuing to uncover the deeper secrecies lurking within fossilised remains. Indeed, the history of the Crystal Palace dinosaurs in some ways parallels our understanding of palaeobiology. In 2016, conservation work began to restore the dinosaurs to their original splendour, including a repaint returning to the statues their bright hues of green, blue and white once enthusiastically splashed on by Victorian sculptors.[10] This mirrors the current work of palaeontologists who very recently made advances towards understanding the vivid spectrum of dinosaur pigmentation.

The Discovery of Dinosaur Pigmentation Patterns

In 2010, two teams from the University of Bristol, UK, and the Institute of Vertebrate Palaeontology and Palaeoanthropology, Beijing, discovered the first traces of pigment in the fossilised remains of a dinosaur. Working on a fossil called Sinosauropteryx, a carnivore the size of a turkey from the theropod family which also includes famous predators such as Velociraptor and Tyrannosaurus rex, scientists analysed the filament-like protofeathers preserved in the fossil under a strong electron microscope. They discovered preserved melanosomes, an organelle found in animal cells which produces melanin and is responsible for colour. The incredible survival of the organelle was attributed to it being an integral part of the feather’s hardy protein structure.[11]

Prior to the discovery of melanosomes, it had been something of an agreement amongst palaeontologists that hue, together with sound, could never be accurately recreated from the fossil record. Yet palaeontologists have since been able to use these fossilised organelles to finally recreate the colour of the dinosaur. From the Sinosauropteryx two forms of melanosome were found: rectangular eumelanosomes that today give zebras their black stripes, and spherical phaeomelanosomes which are responsible for reddish hues. As a result, palaeontologists were for the first time able to determine that the Sinosauropteryx had brightly coloured orange feathers with a striped tail, for use in display and camouflage.[12] 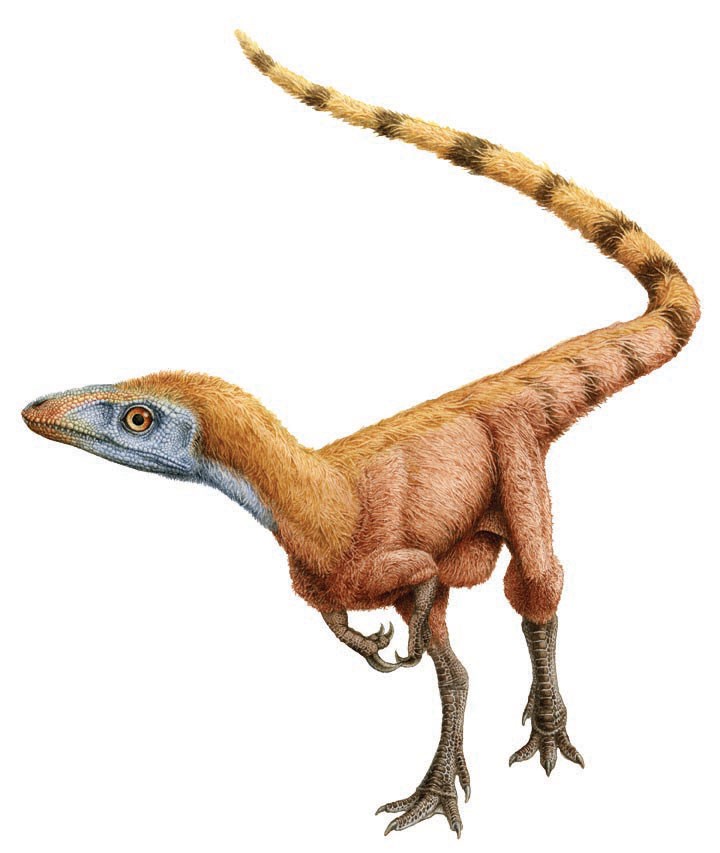 An artist's recreation of the Sinosauropteryx. Image credit to Bristol University This discovery has granted scientists a greater insight into the true colour of prehistoric species, paving the way for the application of the technique on other fossilised remains. The resulting evidence of pigmentation can inform several aspects of understanding of dinosaur physiology and behaviour; from courtship displays, whether colouration differed between the sexes, the role of colouration patterns as camouflage, the dinosaur’s local environment and threat of predation.[13]

As scientists continue to apply modern techniques to replicate the plumage and colours of previous dinosaurs, it is likely that the Crystal Palace dinosaurs will continue to fall to history as monuments to a time when dinosaurs really were terrible scaly lizards. Despite this the sculptures continue to excite as symbols of the boom in geological discovery in the nineteenth century, whilst their stark contrast to our modern understanding serves as a reminder that scientific discovery is continuing to uncover the secrets of our natural past.