As part of our 50th Anniversary celebrations, throughout August we will be looking back at the Association's history and the wonderful archival material we have from our first 50 years.

The Open University’s governing body is known as Council, which has ultimate authority within the OU. Council oversees the University’s overall strategy, finances, property and staff, and is supported by a number of sub committees. OU Students Association President Pam McNay became the first student to directly speak to Council, and we wanted to share her rousing address with you.

To students, the most immediately obvious consequence of current governmental policy is that they're required, through fees and by provision of their own ancillary materials, to cover a greater proportion of the cost of their education. Yet even if the students paid no fees, effectively the case in full time HE (higher education), OU graduates would cost the state considerably less than those of other institutions. But the higher price of being an OU student is increasingly hard to meet; an ever greater proportion of interested people are not accepting offered places; students are taking courses at a slower rate; course choices restricted (by avoidance of summer schools and their extra cost); and the Institution itself is affected in a number of ways, the most worrying of which is the steady southernward slide of the University’s centre of gravity.

There are constant declarations, in both academic and government circles, of determination to increase equality of opportunity and extend access but in reality access is being narrowed and inequality increasing. This is not really a question of resource but one of commitment. Without increased spending, but with a small shift of resource from conventional provision to distance, part-time learning, educational opportunities could be offered to greater numbers of students (and to more from outside the traditional catchment pool).

The counter argument emphasise is the need to protect the standards and levels of traditional provision, but OU students have undoubtedly proved that traditions can be broken (qualified entrance requirements, three years’ full time study, specialist degrees…) without damaging academic standards. We are punished financially for being outside the establishment.

The second undesirable consequence is less immediate and, unlike the first, it could be avoided by the University itself… but I fear that it won't be.

The Open University was established by people with courage and radical ideas. Now it seems that for many that initial, tremendous, personal and institutional risk used up their desire for, perhaps even their ability to cope with, innovation.

The University is aging and becoming conservative. This might not matter if money were plentiful and individual innovative ideas could be ‘indulged’ but the inadequate resources are causing a drift back towards traditional patterns. Increasingly, staff are seeing (or imagining) the importance of ‘specialist’ degrees. The number of courses produced is being reduced to cut expenditure – which are to go? The ‘U’ (undergraduate) courses, that is those not based in a faculty but drawing on disciplines across the University – the newest, most unusual type of undergraduate course. Traditional areas – the faculties – are being treated less severely by academic decision makers than the regional (closer to the student) support services. Student feeling is strongly that in the short term, at least, emphasis should be on satisfactorily presenting and teaching existing courses to students and not on the production of new courses to satisfy their academic creators. 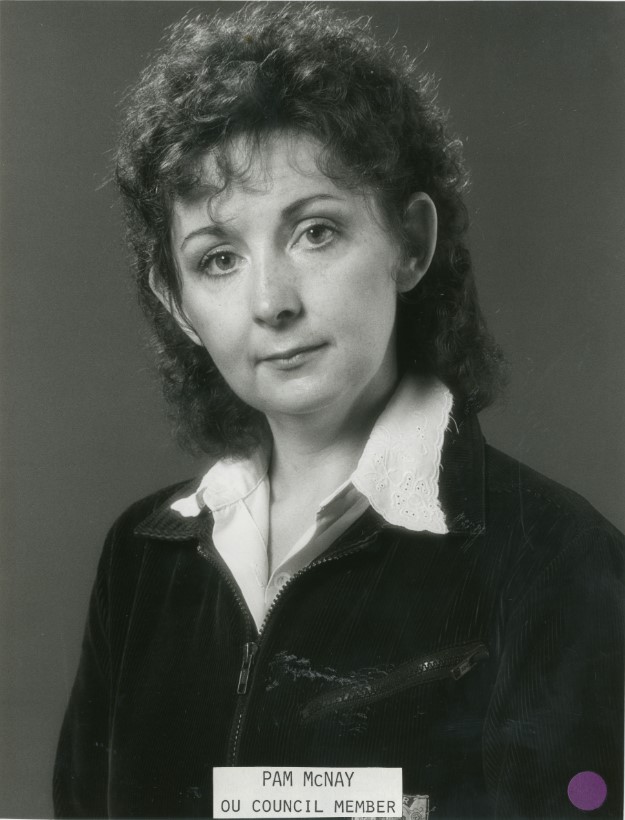 Pam McNay, OU Council memberMoreover, where tradition was initially questioned the OU now has its own orthodoxy which itself needs to be challenged. Some thought is being given to whether all courses need to have the same basic format and components, but is concentrated on what can be emitted rather than looking at the question anew. There is little sign of change in the methods of course production. Efforts have been made to improve administrative processes like student admissions but they remain cumbersome: there can still be a hiatus of almost 12 months between application and admission; the information sent to applicants is overwhelming – to many, not only because of the volume but because of an apparent inability to escape from an inappropriate academic style, it remains incomprehensible.

New technology ought to be giving you opportunities but the resource to explore them isn't being made available. The interactive computer facility, Cyclops, which allows students, or students and a tutor, to communicate visually, through a standard TV screen, while conversing over the ‘phone, is no longer being developed and is unlikely to be exploited.

The third potential consequence, if current government policies persist, is one not yet apparent to many students but greatly feared by some of us. It is the destruction of the OU as an open, undergraduate institution. If fees again rise sharply, if adequate financial assistance for those in greatest need is not available, if tutorial and other student support is reduced, student numbers will start to fall and the University will spiral downwards.

This is more likely if the conflict of interest which now, newly, exist between staff and students is not resolved. The natural move to conservatism of an established institution and an aging staff is being reinforced by fear engendered by the financial situation. Naturally, academics – who hold the decision-making power through Senate – are concerned for their own careers. They must, though, recognise that for many students tenure looks like luxury and to insist, further, on the maintenance of a relaxed, ‘academically free’ work style is indulgence. Academics must be seen to be committed to their students as well as their discipline. Flexibility is called for; if course production has to be reduced then, perhaps, faculty members could mark exam or assignment scripts (without payment) or hold telephone tutorials for some of the smaller population courses; greater effort must be put into designing courses that with minimal re-writing can have longer lives – even though this may be less professionally satisfying them regularly mounting new courses.

Conservatism is essentially defensive; we must take care that in defending our own interests we do not attack one another. The University is under severe financial pressure and all partners in the ‘community of scholars’ must, together, attack the problem of ensuring that the damage to its essential nature is minimal.