Samhain – from the Gaelic and pronounced sow-win – is one of the four Celtic festivals that fall during the seasons each year. Halloween or All Hallow’s Eve takes place at the same time, but they are not the same thing. Samhain goes back to at least the Iron Age in Britain (from about 800BC to the Roman invasion of AD43). It marked the end of summer and the beginning of a darker, more difficult time of the year when the boundaries between the living and the dead become blurred…. And it is still celebrated in the Celtic countries and by those who practise Pagan religions today.

At this time, people lived in clusters of roundhouses in fortified settlements and hillforts, such as Maiden Castle in Dorset, the largest hillfort in Britain. We know life was hard at this time from the remains left behind that show what they ate, what they wore and how they died. As with any festival, Samhain would have been a time of feasting as they made ready for leaner times and the dark part of the year.

The festival was taken over by the Romans, who combined two of their own autumn festivals. Feralia was celebrated at a similar time and commemorated the passing of the dead. The day honouring the goddess Pomona, whose symbol is the apple, was also popped into Samhain, and she is still celebrated as we bob for apples at Halloween!

As we moved into the medieval period, the celebrations got a bit more dangerous, and fire festivals proliferated, culminating in Wales, where men would throw burning wood at each other. And since the 17th century, the people of Ottery St Mary in Devon have run around the streets with flaming barrels of tar as they herald in autumn! 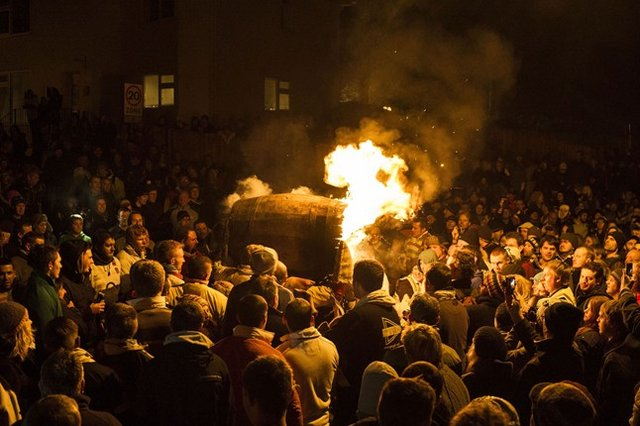 You can visit a replica Iron Age village in Hampshire at Butser Ancient Farm, and go inside reconstructed roundhouses that are based on the archaeological remains of Iron Age settlements around the country. And why not visit during the spring festival of Beltane, when they resurrect the Celtic ritual of the burning of the wicker man?

omg
0
omg
Nicola is a member of the Students Association staff team.