In September last year, a bronze statue of Betty Campbell MBE was unveiled in Central Square, Cardiff to a warm local reception and media coverage worldwide. The statue created by Eve Shepherd celebrates the achievements and contributions of Mrs Campbell (1934 – 2017) who was told as a child  from a disadvantaged background that her dream of being a headteacher was not possible due to “insurmoutantable problems”, but went on to become the first black headteacher in Wales. 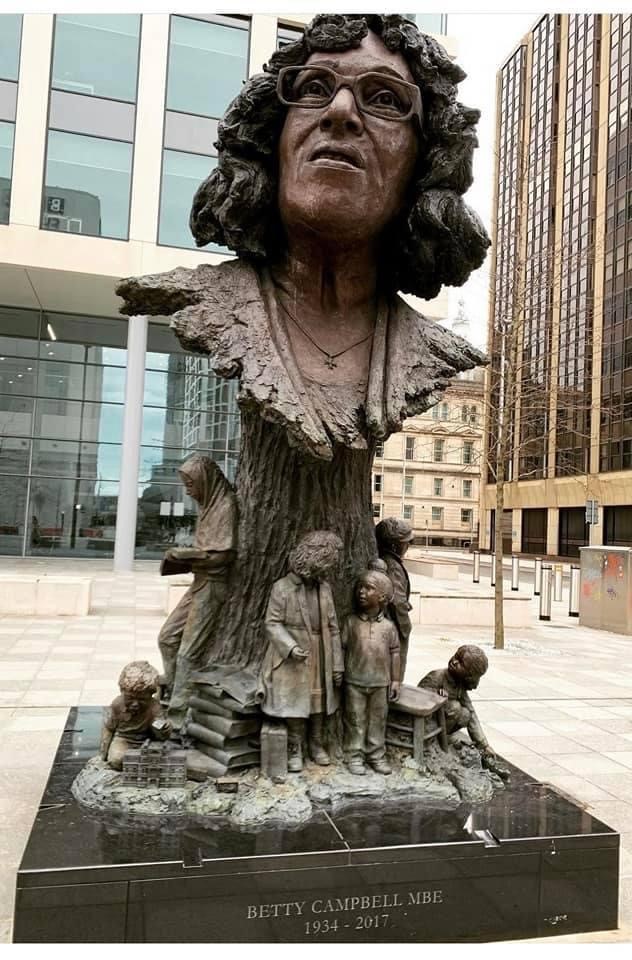 Following travels in America, Mrs Campbell applied what she had learnt about civil right activists, including  abolitionist Harriet Tubman, to include black culture in her school curriculum and subsequently led the way in multicultural education. Mrs Campbell sat on the UK government’s race relations advisory board and she contributed to the creation of Black History Month.

A lifetime champion for her nation’s multicultural heritage, Mrs Campbell was awarded an MBE in 2003 for her contribution to education and community life. Her statue is the first outdoor momument commemorating a named and non-fictionalised woman in Wales.

The installation of Mrs Campbell’s statue marks a significant and widely-celebrated step in the wider campaign by the not for profit group ‘Monumental Welsh Women’, which includes honorary OU graduate Tanni Grey-Thompson in its list of celebrated figures.

The group was created to highlight the lack of public monuments celebrating Welsh women. Following a period of public consultation, the group’s mission is to erect five statues honouring five Welsh women in Wales within five years.

“If you’re determined to do something, you will do it. And I think my life has been full of determinations.” – Betty Campbell

In line with the aims of the Monumental Welsh Women group, further statues will be joining that of Betty Campbell in the near future. A statue of writer, evolutionary theorist and feminist Elaine Morgan OBE was unveiled at Meddygfa Glan Cynon Surgery in Mountain Ash this month. The statue of Welsh teacher, poet, editor and temperance campaigner Sarah Jane Rees, “Cranogwen” is due to be installed in Llangrannog next Spring. Fundraising for the statue of suffragette and businesswoman Margaret Haig Mackworth ‘Lady Rhondda’ in Newport is also underway.

For more information regarding the campaign see monumentalwelshwomen.com