I knew about the OU from really young as my dad studied with the OU nearly at the beginning. He was in one of the first cohorts of students to graduate. I remember sitting with Dad in the school holidays watching the programmes he had recorded overnight, as even after he finished studying, he still enjoyed watching them. I remember men with big kipper ties, not unlike my dad’s! When it came to doing Maths for my GCSE’s my dad gave me his old OU maths books to study and basically said, “if you can do these you can do GCSE maths”, and it actually really helped. 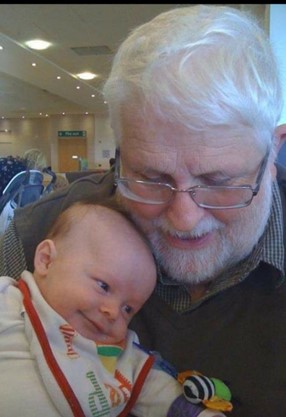 Sarah’s Dad with her eldest son

So, the OU has been in my blood.

I had always planned on being a doctor when I was growing up and when it came to making my choices of courses of what to do for GCSE, I made decisions that would help me.

Unfortunately, I was diagnosed with M.E. (myalgic encephalomyelitis, also known as chronic fatigue syndrome or CFS) and spent most of my GCSE yeas either at home in bed or only in school part time. I didn’t get a great deal of support from the school so missed a lot of education. So instead of trying to go to university with my friends I took a break from education and did various jobs and voluntary work, including being a nanny in America.

It was only later in life that I started to revaluate going back into education. I had always wanted to get a degree under my belt.

I had been through a number of very challenging years starting with losing my first husband after only 3 ½ years of marriage to getting remarried and having two wonderful monsters but awful pregnancies followed by severe post-natal depression. It was hard trying to refind myself in all of that. Through all of this the M.E. had still been effecting me and causing me to be unable to do all that I wanted to.

When both monsters were in school, I made the decision to go back into education because I wanted to be a role model for my boys. I wanted to be able to show them that even though bad things happen it’s how you pick yourself up and get on with life that important. I also had my dad as that role model. He had worked full time with small children and still studied. If he could, so could I.

I signed up to start my degree in Primary Education in October 2017. I was determined to sit behind my computer screen and not talk to anyone. But I am just too nosy for my own good and I found the OU Students Association web page. I also saw an advert for students to come and join in their ‘rules revision’ weekend. At that point I didn’t care what it was as I wanted to go away and be me for a weekend with people who didn’t know me. And this is where my love for the Association came from…

I arrived in Milton Keynes not knowing a single person. The weekend was being held at a hotel close to campus called Kents Hill. I met loads of other people just like me, some had been studying a long time and others had only just started, just like me. I spent a lot of time listening to people talk and just soaking it all in. I had lunch with the then President Nicci Simpson and sat and chatted with Steph Stubbins, who spent her whole time persuading me to stand in the upcoming elections. It was just so lovely to know there were other students out there like me.

I then got involved in volunteering with the Association. I volunteered to help out at residential schools and generally kept my eye on what was going on. When the elections came around, I just didn’t have the time to put in my manifesto, so I didn’t. But then they reopened, and Steph messaged me saying that she thought I should put my name forward, so I did! It was a strange experience but I really enjoyed it. I can’t tell you how nervous I was. But I won! I was the newly elected Faculty Representative for Wellbeing Education and Language Studies (WELS).

I went to the Conference on campus in Milton Keynes in 2018 and that was my first experience of how beautiful it is. The weather was stunning, and I spent a lot of time sat outside chatting with people and met several who have become very close friends. It was great feeling that sense of community.

I loved being the rep for WELS, representing student views across the University and getting involved in projects such as the Culture Review Project for the Association. The skills that I have learned and those that I thought I had lost made me feel like me again. So much so that even though we were at the start of a global pandemic, and I was at the end of my degree I decided to stand for President in the 2020 elections. I managed to get myself elected and I came out with a first! 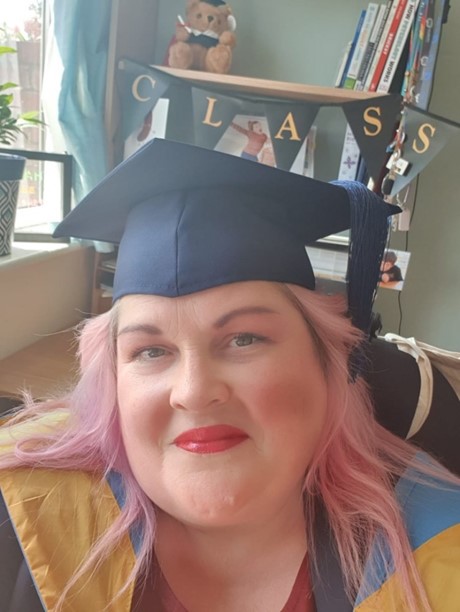 Sarah in her graduation gown

Throughout my time as President, I have been studying for my Masters in Education and loving representing students not only throughout the University but beyond as well. I love the opportunities that have been opened for me and the way I feel like me. I have gained so much confidence in who I am, thanks not just to my studies but to the Association and all those involved. If you haven’t already, I would encourage you to get involved. There is an amazing community of students out there, and who knows you may make friends for life. I know I have!

This blog was written by Sarah Jones. To find out more about the Association and our 50th anniversary, visit the oustudents.com website.