by Lara Munday 1 month ago4 days ago

Exciting news! Five fantastic OU students have proved their impressive wide-ranging knowledge by making it to the live shows of University Challenge 2022-23.

The series began on Monday 29 August, and #TeamOU will be on your screens on Monday 5 September, 8.30pm on BBC Two (UK). Get ready to cheer them on! 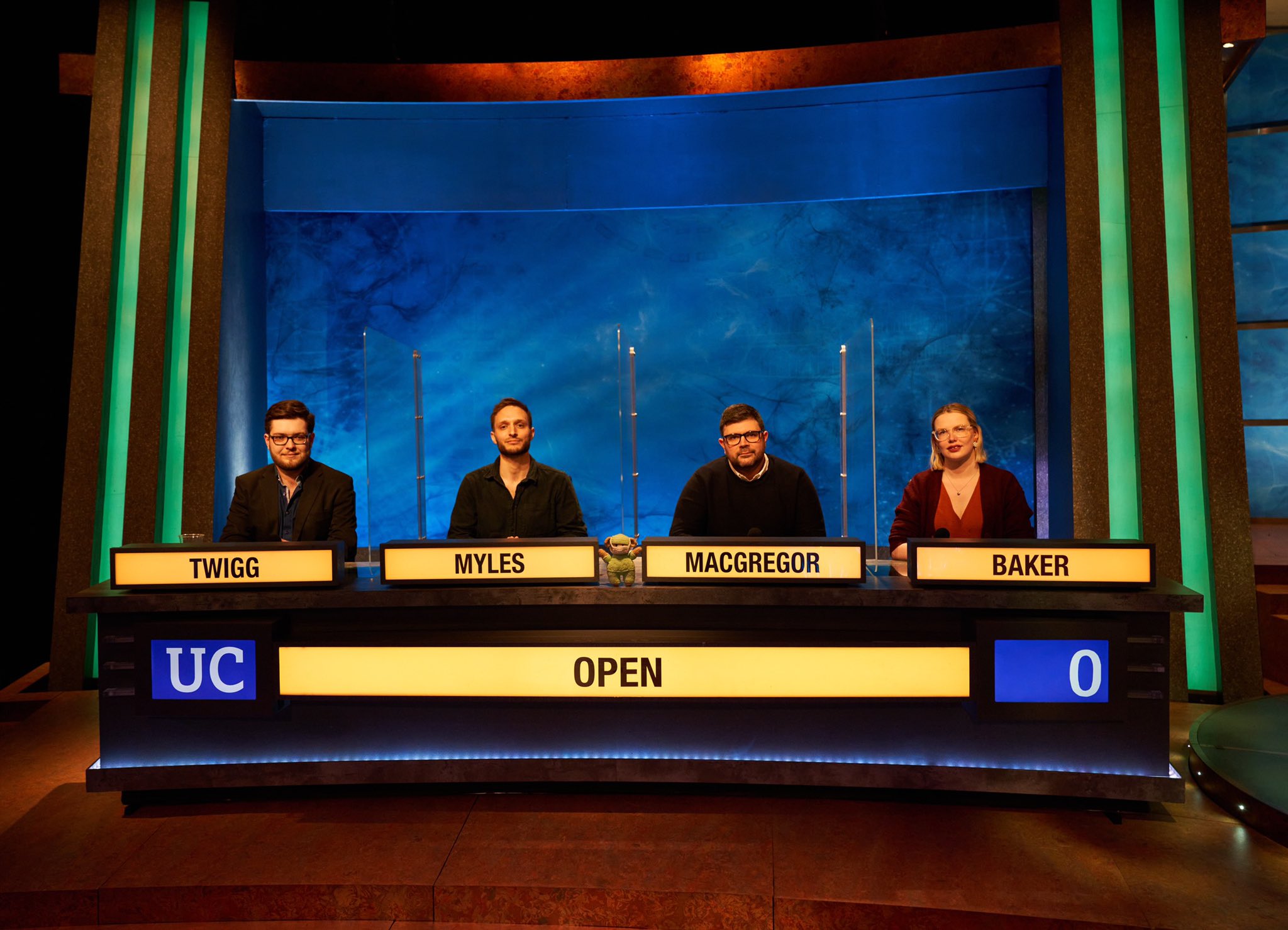 Left to right we begin with Dan Twigg, studying Natural Sciences (Chemistry). Then we have Frederick Myles, studying Economics. Followed by the team captain, James MacGregor, studying History. On the right we have Jess Baker, studying Social Psychology. Not pictured is Charlie Seddon, the reserve member but still very much a valued member of the team on the day and in the preparation, who is studying English with Creative Writing.

We wish the team the best of luck! We know they’ll do themselves proud.

Freddie and Jess kindly shared with us how they found the University Challenge experience, take a read below, and read on to find out how you can be in with a chance of making #TeamOU next year.

"…Having watched University Challenge and played along from my sofa for many years, being in the studio itself and playing for real was a complete whirlwind of emotions! From auditioning online, and meeting the team in person only a couple of times before we found ourselves sat on the set with that iconic theme music playing, the experience was over before I even knew it, but was something I’ll never forget.”

“The process of being selected managed to not be too intimidating as it wasn't 'in person' (on zoom / teams) until everyone had built up a bit of confidence from getting through a few written rounds. Usually the OU team would have a bit of a disadvantage, not meeting in person and only online, but this year that was the case for a lot of the teams. We managed to have a good few meetings online after we had been selected. The trip down to London to audition for the producers was if anything more nervous than the filming – at that stage we were still being judged and selected, while once we were going on TV, they couldn't take us off! The producers and the staff working on the show were, throughout, relaxed, kind and chatty. They seemed used to contestants being nervous and stressed, so did a good job keeping the atmosphere low pressure and low stakes. I was of course surprised when we were selected, but the OU has such a varied student body, and our team had a good variety of people, that in hindsight I'm not surprised we appealed to the producers. It was nice to find that the team got on well in person, and particular credit to captain James, who quickly established that no one was going to get in trouble for getting anything wrong, even if they buzzed in!

Practicing online, and the online match against OU staff, let us refine our styles. I decided I was best off being aggressive on the buzzer, butting in even if I had just an inkling of the answer. Looking back at our performance itself, I felt that speed of answer, rather than simply wide knowledge, is probably more important – watching on TV, you don't realise quite how fast you have to be to buzz in on the starter questions.

A free trip to Manchester and a hotel stay were much appreciated, and we encountered no problem with ITV's expenses system! The team was very much five rather than four of us, with our reserve. Three of us were able to meet up the day before, but we were not filming until the next afternoon. Rather than hanging around, stewing, at the media centre, I decided to spend the morning at the Science and Industry museum. Filming itself was a certain amount of waiting, though not ridiculous, and the assistants on the show were lovely, and clearly practiced in keeping contestants' spirits up! There had been a certain amount of speculation in the hotel over which of the groups of clearly student contestants were our opponents (I hoped it was not the rather unbearable group at the table next to me at breakfast), but we met our opponents in the studio lobby a good hour before, where we could establish there were no hard feelings either way.

The studio lights are bright, the place perhaps a little less spacious than on TV, and there are thankfully staff to check that you don't have a stain on your shirt or a tuft of hair sticking out. After a brief warm up we began. The bit of advice I would give would be to accept that one will get answers wrong. I would say that fear of being wrong is the worst feeling to have – because then you won't be fast enough. I also tried to make sure I was sitting in a relaxed manner, and not fiddling around too much, hoping being externally relaxed would pass on to my mental performance!

At the end of the filming everything happens rather quickly, a few fluffed lines to re-say, but then released straight back onto the streets, adrenaline still flowing, and we said our goodbyes. The attitude I tried to have throughout was to treat it as a laugh, a couple of free trips, and on the off-chance I was able to get anything correct, a bit of bragging to my friends when it was screened. So far as surprises; I hadn't quite appreciated that the vast majority of university teams don't make it on TV, and I was impressed by all the members of staff working on the programme, how they were not remotely media-'luvvy', and not trying to impress how they knew all the answers. The programme makers are clearly very conscious about contestants feeling pressure, or negative thoughts about social media when the programme is shown, which is thoughtful of them. I mainly found the whole thing hilarious.”

Apply for the next series

omg
3
omg
Lara is a member of the OU Students Association staff team.