As May marks the first of our two birthdays, we will be taking a look back at significant events across the first five decades of our history. Marion Horton, a former VP Campaigns at the OU students association, shares some of her memories of her time on the Central Executive Committee back in 1985.

I was frightened when I started my foundation course, I gradually met other students studying a range of courses at introductory ‘How to Study' sessions and day schools.

I also met a couple of students who were involved with the Association and attended my first Association conference in 1985 as it was being held in York University – the city I lived in. I was curious but was almost overwhelmed at the enthusiasm and commitment of the amazing organisation created to support OU students but also to influence the Open University to continue to respond in a student led way. 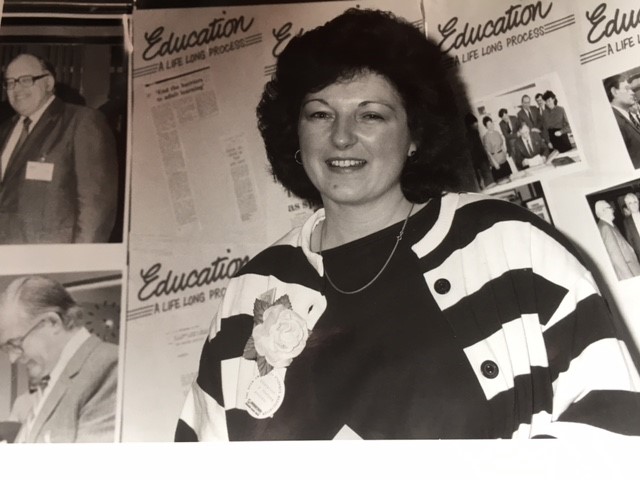 Marion Horton at an Association conference in 1987

I was totally in awe of the amazing people who were at the forefront of conference and leading the Association as Vice Presidents and members of the Executive Committee. Iris Price (then president) opened the conference on the Friday evening and charmed Professor Laurie Taylor who was the guest speaker. She continued in the same vein the next day, chairing the conference with confidence, eloquence, and good humour. Iris united us as a body of students and individually she made us believe we could succeed, and we could help change the student world for the better for other students.

On the Campaign Trail

The campaign to collect at least 60,000 signatures to signal support for The Open University against Government cuts was launched and I became aware of the Vice President Campaigns Chris Walters. She too amazed me with her presence, confidence, and ability to make conference listen and believe that this campaign would be successful.

Collecting signatures was a wonderful way of talking to people and I ended up carrying a campaign leaflet everywhere I went. When President Iris, and Vice President Campaigns Chris and other regional campaigners gathered in London to present the amazing number of 160,000 signatures I could not resist being one of the students. It was so exciting to be in London that day. President Iris knocked on the door of No. 10 Downing Street and the petition was presented.

Earlier in the day I, with students from Yorkshire and Vice President Education Willi Butler had met The Rt. Hon Denis Healey MP for Leeds South East and he signed the petition outside the Houses of Parliament. Later, in the early evening, the MPs attended a meeting at Westminster which was chaired by President Iris Price. The support from decision-makers and prominent members of the government and opposition was exciting and so well organised that we really believed we could not fail, and we could continue to try to change the world for OU students.

We the undersigned believe that the Open University is a university of national and international importance, making a major contribution to the education and training needs of the adult population.

We call upon the Government to restore the funding of the Open University to a level which enables it to maintain its outstanding service to the United Kingdom.

SUPPORT FOR THE OPEN UNIVERSITY

’That this House confirms its belief in the Open University and regrets the repeated grant reductions imposed by the Secretary of State for Education and Science, which involve cuts in real terms for seven years up to 1987 and which ignore the recommendations of the Visiting Committee; furthermore acknowledges the excellent and vital work of the Open University in providing educational opportunities, especially for the unemployed, disabled and those in remote areas; applauds its work in science, technology and professional updating; recognises the cost-effectiveness of their provision; and urges the Secretary of State to reconsider the grant allocation to recognise that investment in the Open University will enable it to realise its full potential and bring much needed economic benefits to the United Kingdom.’

In three weeks, this attracted over 150 Member of Parliament signatures.

The association had firmly established itself as vital source of research and information about adult higher education, a partner in the OU process of influencing the state and was bringing attention of the public to the OU. 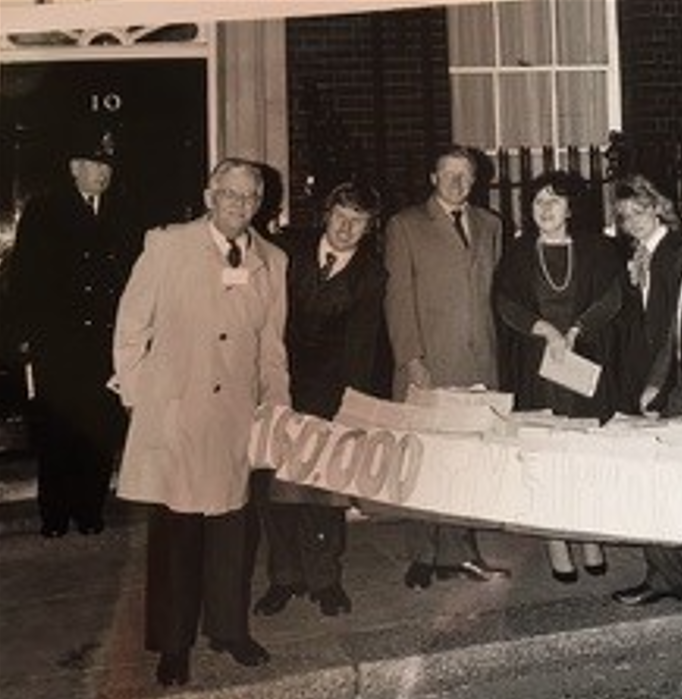 Inequity was obvious as a barrier to adult learners. Most of the cost was fees and the Association believed that Education is not just for those who can afford the fees. We wanted a mandatory grant which could be subject to academic progress being maintained primarily for all students who had not had the chance of previous Undergraduate study.

After contacting so many MPs during the Campaign I personally, like so many students, was on a mission to fight this injustice. I wanted every adult to be able to study without barriers.

Campaigning continued even after the petition and students were making regular visits to MPs surgeries and meeting MPs whenever they could. Campaigning became integral to my OU studies as I realised how much education through the OU was changing my life. Unexpectedly I was invited to work as an unpaid student in the House of Commons for MP Barry Sheerman and that brief period gave me an opportunity to learn more about politics and campaigning. 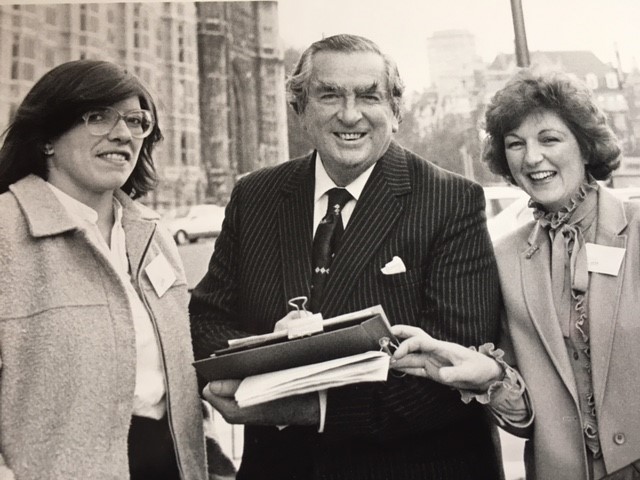 Chris Walters was elected President and in her second year I was elected as Vice President Campaigns. I became what Sesame (the old OU students magazine) called “OUSA’s campaigner” and it was my ambition to turn every member of The Association into a campaigner.

The first gave priority to grants for students with disabilities, the other to promote the Open University was in response to the University’s financial position which led to the imposition of cuts, course deferrals and increase in student fees.

As a Vice President Campaigns I attended the Party Conferences when the Open University held receptions for MPs. Vice Chancellor John Horlock who believed that the label ‘part-time students’ should be dropped, always ensured there was a space on the agenda for me to speak.  It was a thrill to address a roomful of decision makers and individually I was able to talk to MPs like Diane Abbott, who as a prominent NUS spokesperson in her student days ,was knowledgeable and supportive of the Association. It was thrilling meeting backbench MPs as well as the famous ones who were making their mark in history like Micheal Foot and Neil Kinnock, as well as OU academics. The first sociologist I ever read was Professor Stuart Hall so meeting him at an OU event was a personal important event.

The Open University is indeed a great British asset, but it is the people – academics and students working together that make the OU successful.

John Prescott as opposition Employment Secretary visited York Summer School as did the Lord Mayor of York. The association searched out engagement from MPs like John Prescott who had also been adult students – he studied at Ruskin so was supportive that adults should always get that second chance to gain education.  We organised throughout the regional structure of OUSA Education Forums which invited decision makers to engage in debate about students about the future of the Open University.

We campaigned for parity with ‘conventional’ students who did not pay fees. Education is a lifelong process and students should study for the joy of study and gaining knowledge. Their education was going to make for a better society, and they should be debt free to enjoy studying without the worry of fees.

This is still true today but sadly education is expensive to the individuals now. I know I went on to gain degrees and enhance my career and paid much more tax than I would have done had I not had the educational opportunities I had. I still believe that paying fees works againsteducation and the economic situation in the country and is psychologically detrimental. 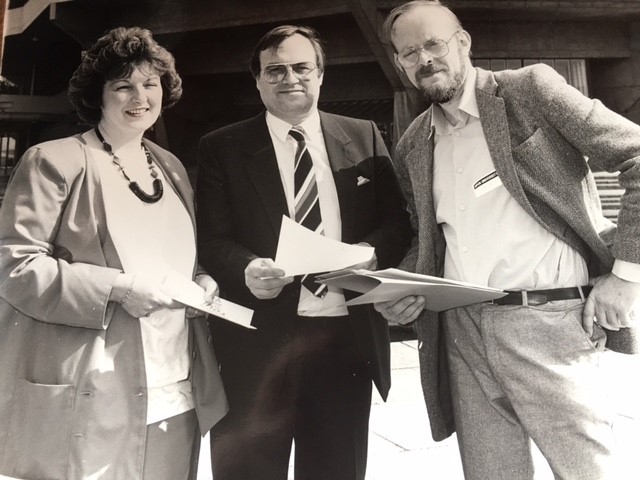 During my time as Vice President Campaigns, I became a member of several OU committees and senate and accompanied Vice Chancellor Horlock to many political occasions, addressed MPs, gave interviews on television and radio, and appeared on the OU Open Forum programmes. Amazing experiences which were vital in my education. Inseparable from all this is the friendship of a group of amazing women, John Needham and Willi Butler who was Vice President Education.

The Association was focused and well organised and the support from the office staff was amazing. As a collective we achieved successes almost unimaginable. The Open University is indeed a great British asset, but it is the people – academics and students working together that make the OU successful.

In 1983 John Needham became the Association’s new Permanent Secretary, replacing Bill Brandon. John had personal experience of being a mature student and was totally dedicated to the future of adult education for the ‘late developer.’ In an article in the Association’s news, he claimed that the Association ‘will not only look after the interests of the student but encourage and coordinate student participation in university and national affairs.’ How right he was.

To read more about the Association's history, visit our 50th Anniversary pages.